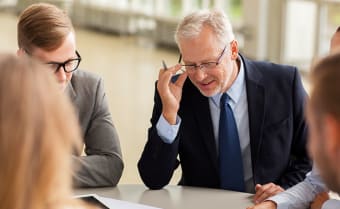 Even our most talented and successful leaders are not immune to the Imposter Syndrome, especially when stepping up into new levels of seniority.

An Executive with a strong track record was hired into a Non-Profit Organization as CEO. He was very excited both to be a CEO for the first time, as well as by the mandate he was given to restructure the Organization. As his first day approached, however, self-doubt began to creep in and he was spending more and more sleepless nights. Was he really up to the task…

With the objective sounding board of a highly experienced coach as a guide, the new CEO delved into a realistic exploration of his signature strengths, values, sense of purpose and self-limiting beliefs and habits. Soon he was reconnecting with a strong passion for his work and the strengths which supported him in achieving ambitious targets in the past, and reframing his worries as a natural part of the transition.

As he fought less with his inner critic, he felt clearer, more decisive and took action. He was able to skillfully navigate to reposition roles with the Board and assess the talent and gaps on his SLT. His natural exuberance helped him build new relationships and, by centering before critical conversations, he strengthened his abilities to engage key stakeholders and gain respect from the SLT and Board.

Three months in he was feeling fully confident once more and was receiving a lot of positive feedback on his vision and new strategies.

Struggling with the challenges of a new role or responsibilities? Contact our Executive Coaches to learn how to discover your inner potential and become the best version of yourself.

Empower Yourself & Your Team

Contact us to arrange a complimentary 30-minute initial consultation and begin to see immediate results.