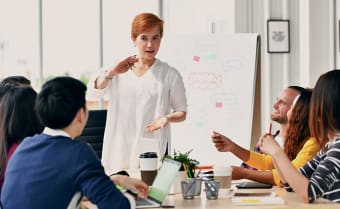 Covid, reorgs, virtual workplaces… these are some of the many opportunities and challenges of the 2020’s. We need effective strategies to ensure that they don’t result in overwhelming our high potential leaders.

Many of our most dedicated and capable leaders drive themselves to deliver; aggressively pursuing targets and solutions even when their dashboards are becoming dangerously overloaded. Helping them to prioritize self-care, as well as organisational results, always yields better results in the long term.

Following reorganisation in a large financial services firm, a Senior Director (“SD”) was referred for coaching by the VP she reported to. The VP highly valued the SD and didn’t want to lose her. She always delivered strong results. Working relationships, however, were suffering.

The SD was working seven days a week as she covered two roles. She was frustrated that her peers were not responding to her meeting requests and her direct reports were missing deadlines. The SD disclosed she was exhausted, had lost the sense of fulfilment she used to feel for her career and couldn’t see a way to manage the constant overload.

With coaching, the SD recognised she could no longer continue at her current pace. She acknowledged that she had been ignoring the signals of trouble for some time. She was able to hit pause, reprioritized her goals and began to shift behaviours. Building in small, consistent times to recharge opened up her abilities to engage others more effectively. She learned about growth mindset and developed more trust in delegating. Relationships improved as peers and direct reports felt more valued and involved in creating solutions.

Nine months later SD reported feeling much of her previous fulfilment at work and was in line for promotion to AVP.

Energy Management is essential to rise to today’s opportunities. Without it, we run the risk of diminished results and satisfaction in our work and home life.

Have you, or someone close to you, been ignoring the signals of impending burn-out? Contact our Executive Coaches to find out more about how you can regain a strong sense of fulfillment in your life and career.

Empower Yourself & Your Team

Contact us to arrange a complimentary 30-minute initial consultation and begin to see immediate results.